Among all types of arthritis, the Osteoarthritis and Rheumatoid are the most common arthritis found in the society. But both have different etiological factor. The osteoarthritis is the degenerative arthritis where the cartilage and joints bones get eroded due to the aging process, obesity, from diabetes, history of injury to joint etc and generally found in older age groups. In contrast to osteoarthritis the rheumatoid arthritis is the auto immune disease occur at any age where the body’s own immune system affect the joints and causes inflammation and stiffness in joints.

Homeopathy treatment for Arthritics is the best way to get cure with no possibility of side effects. This is not a hypothesis as the findings of many clinical trials have shown that homeopathic remedies have generated confirming results in all forms of arthritis. Right homeopathy medicine for arthritis can remove the patient’s pain and stiffness of joints effectively. Arthritis Homeopathy treatment is a long lasting cure compared to other treatment and also gives relief within a short period of time. Homeopathic treatment requires completing the doses of medicine as prescribe by the physician. But most of the patient does not obey the physician and discontinue after some improvement. The proper homeopathy treatment for arthritis is able to deliver a good and long-lasting alleviation in terms of pain, stiffness, swelling like symptoms, in addition to slowing down the worsening of condition.

As soon as the patient starts experiencing improvement in his/her conditions, the homeopathic medicines can be decreased or discontinued completely. Although it is not possible to reverse the irreversible pathological tissue changes by any remedy, the proper homeopathy treatment for arthritis is able to deliver a good and long-lasting alleviation in terms of pain, stiffness, swelling like symptoms, in addition to slowing down the worsening of condition. It is highly recommended to opt for proper homeopathic treatment for any kinds of arthritis to lead a healthy and hearty life. We’ve successfully treated thousands of patients suffering from various forms of arthritis in our treatment center and all of them are now leading their lives to the fullest with no annoying pain. 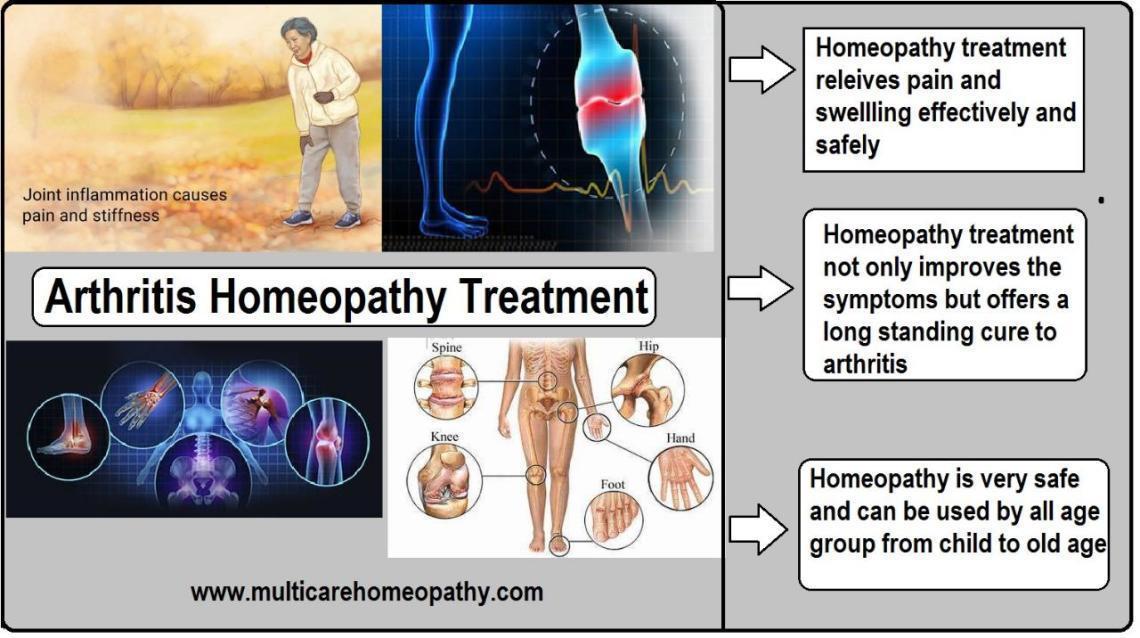 Rhus tox- Rhus tox arthritis symptoms are relieved by motion. They are worse from sitting and worse from rising from a sitting position, or on first commencing to move; continued motion, however , relieves. Warmth also relieves the Rhustox arthritis. Damp weather and the approach of storms aggravate, cold also aggravates. Rhododendron is similar, in that change of weather aggravates. The character of the Rhustox pains isfirst a stiffness and soreness. There are also tearing pains, drawing, paralysed sensation, and even stitches. The sudden pain in the back known as “crick” is met well with Rhustox. It has an especial affinity for the deep muscles of the back. It is perhaps the most often indicated of any remedy in backache. It is also, it may be mentioned in passing, a remedy for the effects of overexertion, such as sprains, wrenches, etc, being to fibrous tissues what Arnica is to the softer structures. The arthritis calling for the Rhustox may appear in any part of the body; the lower extremities seem to have suffered most in the provers. The great keynotes of Rhustox are the following

Bryonia- The arthritis of bryonia attacks the joints themselves, producing particular rheumatism, and it also inflames the muscles tissue, causing muscular rheumatism. The muscles are sore and swollen, and the joints are violently inflamed, red, swollen, shiny, and very hot. The pains are sharp stitching or cutting in character, and the great feature of the remedy should always be present, namely, the aggravation from the slightest motion. Touch and pressure also aggravate. From the earliest time the Rhustox and Bryonia has been the great arthritis remedy and the difference between these two remedies arre given below

There is but little tendency for the arthritis of Bryonia to shift about like that of Pulsatilla or Kalmia. It is not liable to be mistaken for any other remedy. Ledum has some points of similarity. It would come in particular rheumatism, where there is a scanty effusion, while Bryonia tends to copious exudation. Bryonia seems to suit well the acid condition of the blood, which gives rise to rheumatism; it has a sour sweat; also, Kali carbonicum has shifting pains, but absences of fever will distinguish it from Bryonia. Bryonia, Ledum, Nux and Colchicum are the four chief remedies having aggravation from motion. General constitutional symptoms will most likely be present in case calling for Bryonia. Excessive tenderness of the soles of the feet may suggest Antimonium crude.

Causticum- This remedy resembles Rhustox quite closely in many respects. Thre following are some of the differences:

The symptoms calling for Causticum are stiffness of the joints. The tendons seem shortened and the limbs are drawn out of shape. It is sort of rheumatoid arthritis. As with Rhustox, there is relief from warmth. There are drawing muscular pains and soreness of the parts on which the patient lies. Colocynth has a stiffness about joints and is also useful remedy in articular rheumatism. Causticum like Guaicum and Ledum , has gouty concretions in the joints. There is much weakness and trembling with Causticum, as with all the preparations of potash, and it is of little use in arthritis troubles if fever be present. Weakness of the ankle joint, contracted tendons, and a sprained feeling in the hip-joints are some of its important symptoms.

Ledum – Ledum is one of our best remedies for arthritis and gout, especially the latter. The great symptom which has always been regarded as the distinctive characteristic is the direction the pains take, namely, going from below upwards. Like Caulophyllum and some others, Ledum seems to have a predilection for the smaller joints. Nodes form in them and the pains travel up the limbs. The pains are made worse from warmth of the bed. The effusion into the joints is scanty and it soon hardens and forms the nodosities above mentioned. Ledum, like Colchicum, causes acute, tearing pains in the joints; weakness of the limbs and numbness and coldness of the surface.

Pulsatilla – Pulsatilla is usually brought prominently to mind when there is a tendency for the rheumatism to shift about, wandering rheumatic pains being one of its red strings. But other remedies have this symptoms also, prominent among them being Kalmia, Bryonia, Colchicum, Sulphur, Kali bichrominum, and that member of the tissue family most resembling Pulsatilla, namely, kali sulphuricum. There is little trouble in distinguishing Pulsatilla from any or all of these remedies by its general symptoms. Kali sulphuricum, however, will give the most trouble, but it is not a well proven remedy and need only be thought of to try when Pulsatilla seems the remedy yet fails. Other characteristics of the Pulsatilla arthritis are the aggravation from warmth, aggravation in the evening, and the relief from cold. There is, too, frestlessness with the remedy, the pains are so severe that the patient is compelled to mov, and slow, easy motion relieves, as also with Lycopodium and Ferrum. A prominent use of Pulsatilla is in gonorrheal rheumatism. The joints are swollen and the pains are sharp and stinging. Kali bichromium is also a remedy for gonorrheal rheumatism, as well as for wandering pains; it has relief in a warm room, which at once distinguishes it from Pulsatilla. Arthritis dependent on disturbance of the liver or stomach is apt to find its remedy in Pulsatilla.

Calcarea Carbonica - It is one of the important medicines for Osteoarthritis especially of knee joint. There is mild swelling and pain in the deeper portion of the joint. The pain is generally worse in cold damp weather. Like Rhus tox in Calcarea carb the pain is also aggravated when getting up from a sitting position and also by walking. The person is fatty and obese constitutionally and tendency to catch cold easily.

Rhododendron- Rheumatic pains which wander from joint to joint with swelling of joints, worse before or during thunderstorm, cold or wet or unsettled weather. Better from warm wrapping. Enlargement of joints not due to gouty deposits. Arthritic nodes.

Kalmia- Kalmia is another of the remedies which have wandering pains, and it is especially useful in pains affecting the chest i.e. the cost chondral articulation. It has also tearing pain in legs, without swelling. The pain is neuralgic type of pain. The pain from the chest portion shoot down into the stomach and abdomen. Sometimes the pain from chest traverse downwards in arm. The pain is always attended or succeeded by numbness of the part.

Colchicum- this is the great remedy for gout the typical case calling for colchicum is where the swelling is red or pale, with extreme tenderness to touch, a tendency to shift about from joint to joint, and pains which are worse on the slightest motion. If the general symptoms of great prostration of the muscular system and abdominal bloating be present colchicum is the remedy. It is more indicated when the smaller joints, fingers, toes, wrist and ankles, are affected; the pains are very violent, patient can not bear to have the parts touched or to have anyone near him. Arnica has this fear that the partmay be hit by anyone passing; it has also arthritis pains in the foot, worse towards evening, and a red big toejoint which feels as though it had been spraines, so arnica may be indicated well in gout. The colchicum patient is apt exceedingly irritable and the gout is not apt to decrease this irritability. Unless colchicum be given according to these indication it will do not permanent good.